"Situation: Shadowgate is the name of an ancient fort situated in the foothills of the mountains which mark the kingdom of Quild's northern boundary.  It was constructed long ago, by the magis and artisans of the First Kingdom, to protect the land from the attacks of creatures from beyond the walls of the world.  The central part of the keep was built around a gate which the creatures used to reach the lands of men.  The keep was built to keep safe the magical wards which locked the gate.  The physical keystone of those wards was a large, multifaceted crystal.  With it in place, the shadow creatures could never break through..." 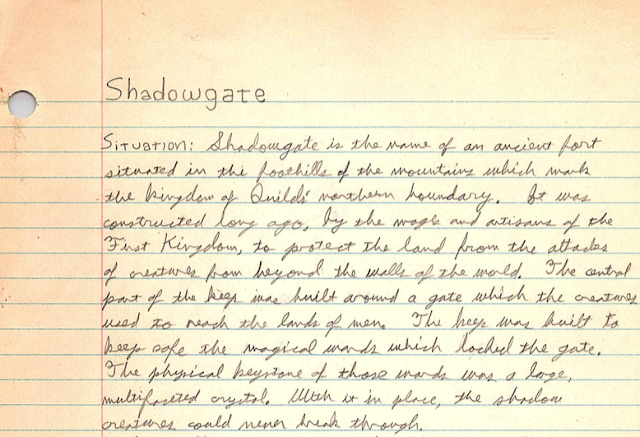 Of course, it would not be a D&D adventure without a map.  The map looks like I spent a lot of time on mountains. 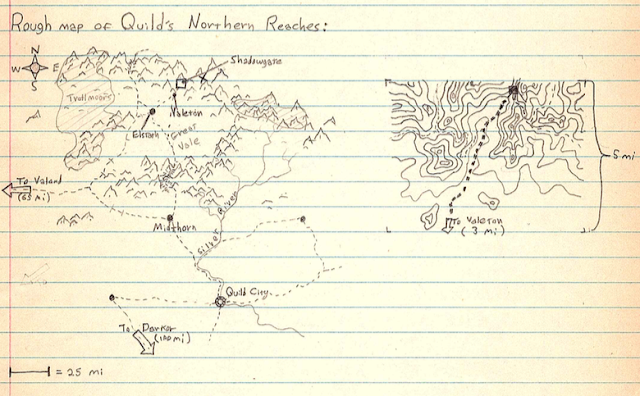 And yes, naturally, there is an evil priesthood:

Troll swords?  Boy, have we got awesome troll swords:

And if you're lucky, it's gonna just be a pack of 5-10 feral wolves you encounter.  If you're unlucky, you might get  any of a variety of demons, or if the DM is really feeling cranky, a "Greater demon":

I almost forgot about the Shadow Beasts:

And that's just to get to the town.  That's when the mystery really begins... WHO stole that keystone, and WHERE is it now?  And how can we get rid of these freaking Shadow Beasts that keep appearing?

Maybe the warrior monks of the Order of the Gate can help out.  Or maybe they're the ones releasing the Shadow Beasts!

It turns out this adventure is actually a whodunnit.  (No spoilers, but you can read the whole thing online here.)

(I actually have next to no memory of writing this.  It's probably one of a whole set of things I wrote when I was 11 or 12 but this is the only one that survived.  I don't think I ever ran a campaign using it.)