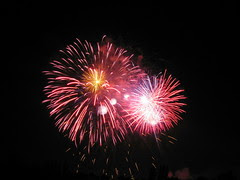 Yesterday the family went to see the 4th of July fireworks just outside the Google campus, in Charleston park.  Great park, lots of friendly helpful people, the kid had a blast running in the water fountain, and he saw his first fireworks show.  It was great!

Then, we left (quickly, to avoid the crowds) and immediately got snarled in traffic.  Of course everyone was leaving at the same time so we expected it to be slow, but we were literally not moving for a quarter of an hour.  After a while we figured out that we couldn't move because other cars kept joining the queue ahead of us from other parking lots.  Around this time, other people started figuring this out too and started going through those same parking lots to jump ahead.  This solution to the prisoner's dilemma took about 30 minutes to really begin to cascade:  Everyone else began to drive through parking lots, under police tape, on the wrong side of the road, cutting ahead wherever they could to avoid being the sucker stuck at the end of the never-moving priority queue.  (Full disclosure:  I drove across a parking lot to get over to the main road where traffic was moving, but violated no traffic laws.)

I wonder how the results would have been different if the people involved could communicate efficiently instead of being trapped incommunicado in their cars.   I bet every single car had at least one cell phone in it, many with GPS.  Imagine an ad hoc network based on cell phones and GPS, communicating about traffic flow -- nothing more complicated than speed plus location and direction, and maybe a "don't head this way" alert.  It'd be interesting to try.